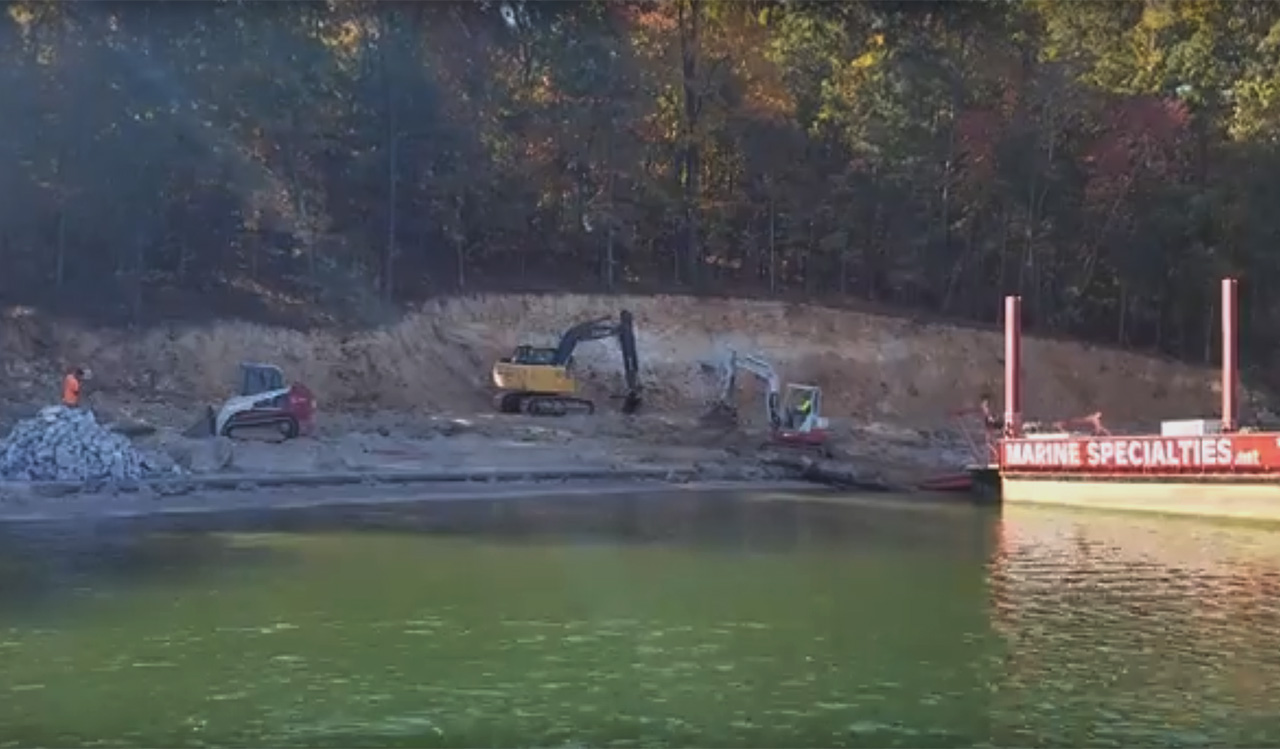 from The Gainesville Times

Four islands in Lake Lanier are getting help to defend against waves and boat wakes that have eroded their shorelines since the lake was built in the 1950s.

Lake Lanier Association has teamed up with Hall and Gwinnett counties, private businesses and the Army Corps of Engineers to put heavy stones, or riprap, along the shores of the islands — basically hilltops before the area was flooded to create the lake.

In all, some 6,500 tons of stone will be used to line 3,150 feet of shoreline on Browns Bridge, Aqualand, Six Mile and Van Pugh islands south of Browns Bridge, which spans Lanier at the Hall and Forsyth county lines. “As the lake ages, just due to wind patterns and boat traffic patterns, the shoreline has a tendency to erode,” said Joanna Cloud, the lake group’s executive director. “Old-timers will tell you there are some islands that have completely eroded away, that are completely washed in.”

Marine Specialties workers were scrubbing away debris from Van Pugh’s shoreline Monday morning in preparing to lay the stone. Once Van Pugh is completed, work will move to Six Mile, then Aqualand and Browns Bridge, Cloud said. The project, expected to be completed in March, involves some $275,000 in riprap, with funding coming from Hall County’s special purpose local option sales tax, Gwinnett County and the Chantal and Tommy Bagwell Family Foundation.

“It’s kind of a small start,” Commissioner Jeff Stowe said. “We hope that in the future we can dedicate more dollars to protecting the lake.”

A U.S. Supreme Court trial started Monday in Portland, Maine, over Florida allegations that Georgia is consuming too much water in the Apalachicola-Chattahoochee-Flint River Basin, which runs from Lake Lanier in the headwaters to Apalachicola Bay in the Gulf of Mexico. “Any reduction in the amount of water available for drinking supplies is a serious concern,” stated a Lake Lanier Association press release in October announcing the riprap project.

The 38,000-acre lake, which hugs Hall’s western boundaries, provides drinking water for some 4 million North Georgia residents, according to the group. The corps issued permits for the project, which involves stone being hauled in from Vulcan Materials quarries in Flowery Branch and Dahlonega. The riprap project isn’t the Lake Lanier Association’s first effort in protecting island shorelines. In January 2015, some 1,000 tons of stone covering 600 feet were used to drape Three Sisters Island. The Bagwell foundation funded that effort.

“It has accomplished its mission,” said Rich York, an LLA board member and riprap project manager, of the Three Sisters project. “It has secured the shoreline.”
Officials say one other thing is certain: Other islands in Lake Lanier need the same treatment.

“We haven’t quantified it, but there is certainly an opportunity to do a lot more of this,” Cloud said. “Some of these islands … have 20-foot high cliffs that have completely eroded.”