Pulled the “Titanic” houseboat out this week — our fourth houseboat removal in a single year. This one was fully submerged. We had sent a diver in on it twice looking for registration numbers to no avail. Got it in the light of day today and were able to find the Hull Identification Numbers so now law enforcement gets to jump in the mix with us on this matter. Titanic was home to three very large catfish that were not pleased about losing their fancy crib but seemed happy enough once released back into the water.

Lots of good media coverage on this event… 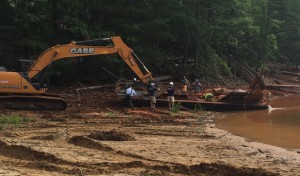 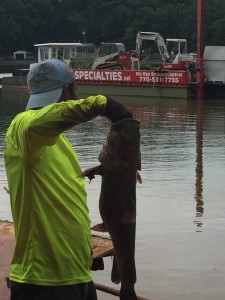 Another Abandoned Houseboat on Lake Lanier “Bites The Dust” 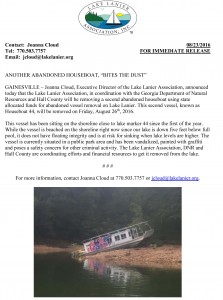 Great News out of Hall County!

By Pamela A. Keene

A sunken houseboat on Lake Lanier has gotten the attention of the media in Atlanta. Two months ago, the boat was found just off the shoreline near Sunrise Cove Marina, apparently abandoned.

The Lake Lanier Association reported it to the Corps of Engineers about six weeks ago. According to the association, the ownership of the houseboat is in question because the owner has reportedly died without a will and there has been no one to accept responsibility for it. “We have been trying for more than a month to work with various authorities to determine the ownership of the boat,” said Joanna Cloud, executive director of the Lake Lanier Association, which has successfully removed several abandoned boats from the lake over the past 18 months. “Right now, the situation is unclear because we understand the original owner died without a will so there is no designated heir. And we just found out that at this point, nothing has been filed in probate court regarding his estate.”

Typically, when the association identifies a vessel or dock as possibly abandoned, Cloud has worked with the Buford Dam Project Office of the U.S. Army Corps of Engineers to attempt to locate and/or identify the owner. The process includes coordinating with the Georgia Department of Natural Resources, who holds registration papers on vessels, or the Corps, who issues permits for docks. The process includes searches of records and publishing a legal notice with the local media.

“In most cases, the Corps has worked with us on a case-by-case basis,” Cloud said. “Once the boat or dock has been determined to be abandoned, the Corps issues a letter authorizing removal. Then we work with our community partners, such as Marine Specialties and TowBoatUS, to remove the boat from the lake and haul it away.”

Last summer, volunteers spearheaded the removal of a 19-foot runabout from the shores of Lanier Park in Gwinnett. TowBoatUS and Terry’s Auto Towing donated their services in that case, after the association received a letter of authorization from the Corps.

However, this case is not as clear cut. Cloud has spent the past two months contacting various agencies, including the Hall County Sheriff’s Office, the Department of Natural Resources and the Corps. To date, she has been unsuccessful in getting assistance to move forward to remove the now-sunken houseboat.

WSB-TV/Channel 2, CBSAtlanta and WABE Radio all broadcast news stories about the situation during November, but Cloud continues to be frustrated. “Still no one agency seems to be able to give us a clear picture of the process we need to follow in this case,” she said. “We are very concerned that the boat may begin leaking fuel, oil or battery acid into the lake, but when we’ve spoken with the DNR’s Environmental Protection Division, they say that until there is evidence of pollution, they cannot act. They’ve referred us back to the Corps because the boat is on federal property.”

Last month, Lakeside contacted the Corps’ Lanier office and was referred to the District office in Mobile. According to Federal Code Title 36, Part 327.15, the Corps has the authority to impound abandoned property from federal project lands and waters. However, in many cases budget issues prevent the Corps from acting. “Could the Corps act to impound abandoned personal property?,” said Pat Robbins, public affairs with the Mobile district. “The answer is yes. That would include removing the vessel, finding a place to store it, going through the process of attempting to locate the owner, and if no owner is identified, holding the boat for 90 days before being able to sell it. Any proceeds from the sale would go into the miscellaneous fund of the U.S. Treasury; they would not come back to the Corps’ budget. As long as it’s not a hazard to navigation or a safety issue, the costs for such a project would not be in the best interest of the Corps, especially when the Corps could not recoup the costs.”

In previous cases, the Corps has worked with the association to verify that a boat’s owner cannot be identified and then has written a letter to the LLA allowing them to remove the boat. Each abandoned boat or dock has been evaluated on a case-by-case basis, with the Corps issuing separate letters each time.

“We are working on a blanket memorandum of agreement with the association, but every situation is unique and it may be hard to write an agreement that would cover 99 percent of the cases that come up,” Robbins said. “We have been assisting and working together with the association to find the owners of boats or docks, but as a non-profit, they can solicit donations to help with removal.” Robbins said that the attorneys in Mobile are looking into the situation and contacting Probate Court to determine if the estate has been filed. As of press time, a determination had not been made by the Corps legal staff.

Cloud said she is hopeful. “Our main concern is protecting Lake Lanier, and we’ve committed to removing abandoned vessels and docks,” she said. “Yes, this is a difficult situation, but if it had been addressed when we first reported the houseboat six weeks ago, maybe it wouldn’t have sunk and created an even more costly process of removing it. I hope that we can work out a process for more timely responses to abandoned personal property on the lake. It’s in the lake’s best interest to do so.”

Ongoing Efforts on Abandoned and Derelict Docks and Vessels

Good article in the Forsyth News about ongoing efforts to get more enforcement around the abandoned and derelict dock and vessel issue.