The Lake Lanier Association is pleased to announce the appointment of Todd Baxter as the new LLA President. Todd begins this role upon the announcement of John Barker’s retirement. 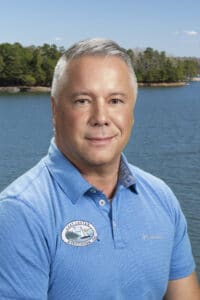 Todd has served on the LLA Board of Directors since April 2020. Todd and his family reside year-round on the northern end of Lake Lanier. Having lived in 7 different states, Todd and his family chose North Georgia as their haven and refuge, and call themselves fortunate to live in such an amazing part of the world.

Todd has had a distinguished professional career as an executive focused on helping large companies ensure their service models are best in class and operations are performing at their peak of quality and efficiency. Todd has been responsible for global organizations with locations on nearly every continent, and has served many industries in this regard.

A service-first mindset has been in Todd’s DNA as long as he can remember, and this holds true with his community as well. Thus, his initial desire to serve on the LLA Board of Directors, and now to serve in the capacity of President. In anticipation of taking on this new role, Todd looks forward to leading LLA to new levels of engagement and achievement. He hopes to ensure that the Lake Lanier Association is viewed as a trusted resource for all things Lake Lanier, as the association continues to focus on ensuring a Clean, Full and Safe Lake Lanier exists for generations to come and the 12 million+ users who enjoy her bounty each and every year!