Faced with a stubborn drought and the warmest April on record in Atlanta, the Georgia Environmental Protection Division (EPD) is urging metro Atlantans to conserve water and follow the state’s outdoor water use schedules.

“With Lake Lanier showing only slight improvement after recent rainfall it’s more important than ever for citizens to be good stewards of our water supply,” said EPD Director Richard Dunn. “The lake remains eight feet below its full water level. Coupled with the fact that it is not unusual during a drought for Lanier to drop six feet or more over the summer, it is critical that metro Atlantans follow a Level 2 Drought Response, which allows reasonable outdoor water use while still saving water.”

The Level 2 Drought Response has been in place since November in the following 12 counties: Cobb, Coweta, Dekalb, Douglas, Forsyth, Fulton, Gwinnett, Habersham, Hall, Lumpkin, Paulding and White counties. These are counties that depend on Lake Lanier and the Chattahoochee River for water supply.

Prohibited outdoor water uses under a Level 2 Drought Response include:

The following activities are allowed under a Level 2 Drought Response: 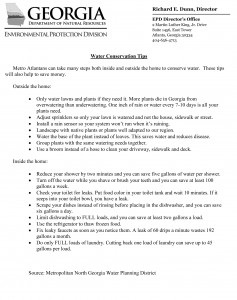